Skip to content
August 9, 2010 CC At the Top of MY head, Educational, Uncategorized, Where we went. Leave a comment 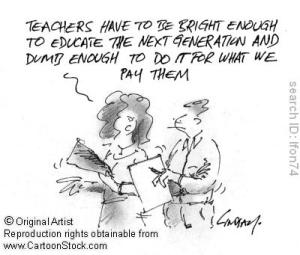 Houston we have found the answer to the problem! ( I think)
Teachers salaries are too low. They are not even close to what basketball players get, not even the players that sit on the bench all season! According to Inside Hoops salaries start at  $473,000, just for starters!
What’s the deal with that? You know the society we belong in is really backwards when they pay people that entertain us more then the educators of our children. Austin a mathematics teacher stated” I am  teacher for 5 years. The pay is terrible and I am almost willing to take any other job in mathematics. I have school loans up to my neck and find it impossible to move out of my parents house. It is so discouraging to know that in many years ahead it doesn’t look like it will be getting much better.”

I’m pretty sure that’s how many teachers feel. The Board Of Education  acts like they care about our children by saying “oh we are raising the standards because we want out children to be better on school, we want them to work harder”

Oh yeah I say?? How about giving the teachers better in incentives in not only their work ethics but in the salary. Ask a teacher what needs to be done to improve such dismal performance as the Big  F NYC schools received on the state exams and it’s a good bet the first answer will be to raise teachers’ salaries, thereby attracting and keeping better teachers. ”If we want to improve the quality of our public schools,” said Sandra Feldman, president of the American Federation of Teachers,(AFT) ”a major part of that is to make sure we can, to be cliched, attract the best and the brightest, and you’re not going to do that without increasing salaries.” I agree with her. To pay our teachers more will attract better experienced teachers. But I don’t want a teacher to teach just because the pay is good….you know? Says an article in the New York Times...”Everyone in the teaching profession hopes teachers will get paid more, but whether that is correlated with more learning is an open question. For most people who go into teaching, money is not an issue. It’s like in other helping professions — it’s what you want to do and you know you’re not going to make a lot of money doing it.” So why are children in private schools doing better, it’s because the teachers a being paid more …right???  Nope! One argument that undermines the push for higher pay is the comparison between  private and parochial schools, whose teachers are generally paid less than public school teachers,(yes private school teachers are paid less) but whose students often out-perform public school students. The nation’s Catholic schools teachers are payed 45 percent below the public school average. At other private schools teachers are payed 11 percent below public school levels. Catholic school administrators say their schools perform well  because their teachers are dedicated, their curriculum is highly structured and discipline is maintained. Private schools often outdo public schools, educators say, because they have smaller class sizes and student bodies often culled from the nation’s elite.

That brings up the next topic. Is it just the salaries of the teachers that trickles down to the way our children are being educated? Or is it the class size? Class sizes have continued to grow since…. 1987 (the year I started kindergarten) I still remember all half the students in my classroom till this day. That’s how small my class was . Now when I pop up at my daughters class I am overwhelmed by the amounts of Hiiiii Cheday’s mommy I get simultaneously (29 to be exact). Class sizes were and should be much smaller so that the teacher student ratio is fair. New York City’s classes have 10 percent to 60 percent more students than those in neighboring suburbs, and the highest average size of any school district in the state. A Tennessee study in the late 1980s, widely regarded as the most influential study on class size, found that in kindergarten through third grade, students in classes of 13 to 17, particularly poor and minority students, performed better than those in classes of 22 to 25. In some cases, the benefits extended through high school.                                                                             That should be enough evidence right?? DECREASE CLASS SIZE NOW!    Since then, many states and school districts have rushed to reduce class sizes, usually to the low 20s, sadly student achievement has not consistently improved. And In New York City, an Education Department comparison over the last two years between school report-card grades and average class size has found little correlation; in many cases, schools with better grades have bigger classes.

So it seems that we were wrong after all we want smaller class size because it makes us feel all warm and cuddly inside and we want our child to get more attention.  Then we want the teachers to get better pay so we can get better results in our children. We want the Board of Ed to stop bullying us parents around and help our kids prosper without pulling our resources from under our feet.Unfortunately, it doesn’t look like that’s gonna happen any time soon. Soooo now what? As an average parent we don’t know much about the politics of our schools system accept for  the monthly PTA meetings. After the discussions of the cheerleader team uniforms and the cake sales a lot of times we just vent our frustrations and listen to hearsay about how the system failed us and our children. That’s when I leave.  I can’t. I don’t trust anyone’s info unless I did the research  myself. Hell, people lie! and I hate Gossip (the bad kind lol). We Are lied to  all the time by politicians making false promises. Leading us to believe if we vote for this particular councilman that our schools will get this and get that. Listen I’m not against politics nor voting.(Voting is a right everyone should practice and yes that one vote can make a change) I’m just against the bullshit.

And quite frankly some of the bullshit is with us …..the Parents. Those who want to point the finger so badly at Bloomberg and how bad of a teacher our child has that we forget to realize the other fingers pointing at us……..

This site uses Akismet to reduce spam. Learn how your comment data is processed.

CC is a mom, blogger, child-advocate, grassroots organizer and Founder of the Brooklyn based nonprofit CC'S Kidz.