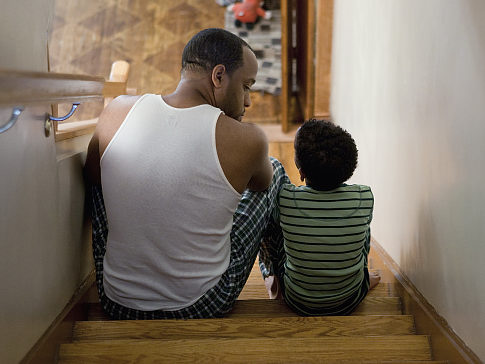 I am soooo for single mothers!!! Especially young single mothers. Why??  Because I have been there. I am here ! And my empathy runs deep. But I have not forgotten about the fathers out there that contrary to social belief…. are involved (actively) in their child’s life. Those whom are single fathers themselves. I can’t even say that I wish there were more men that took care of their children when in fact there are a lot! There are 2.3 million single fathers in America today. So ladies, stop complaining about men who don’t do right by your  children ….. Just complain about your man ( if he ain’t doing right that is)
I was one. One what?
I was one who complained about ……almost everything and I had every right too!!!

Times were hard and we were clashing quite often. But through the years we’ve had multiple trials and errors of co-parenting. Along with some major growing up and communication we have come to an understanding. It’s working. Positive intervention made us realize that we are still a team. As much as men watch and play sports you would think they know lots about team work right? Especially after seeing them cry during the Superbowl, Wha???!!
Anyway, enough of the semi male bashing. You Fathers are doing great!! I recently read an article about a program at Rikers Island that encourages incarcerated men to read to their children; to promote bonding and “to change the attitude that reading is the moms job”. The 5 week program  teaches the fathers not really HOW to read but the WAY to read to their children. Many men stepped up to the plate. Read about it here.

It’s enlightening to know that fathers from every background and social status want to really be involved in their children lives. I just want to give a nice BIGGUP to the dads around the world doing their thang. Because it’s good to get acknowledged on other days of the year besides Fathers Day.

If you feel the same way join me in this conversation. What do you think?

I would say Have Fun but…NO events on this post.

This site uses Akismet to reduce spam. Learn how your comment data is processed.

CC is a mom, blogger, child-advocate, grassroots organizer and Founder of the Brooklyn based nonprofit CC'S Kidz.